Can Your Hair Tell You if You have Depression?

There are lots of hormones and neurotransmitters (chemicals released by neurons) that contribute to our mental health. You may have heard of dopamine and serotonin for example, which are both neurotransmitters known to contribute to a more positive mood. There’s also cortisol: this is the hormone that people often associate with stress, since it’s often released when we’re experiencing stress or going through anxious feelings. Obviously, these hormones and neurotransmitters have tons of roles and are much more complex, but they play an influential role in how we feel and react to events because of our mental health.

Researchers recently studied to see if cortisol in hair can help predict if adolescents have or are at risk for depression. The hypothesis makes sense: both really high levels of cortisol and low levels of cortisol have a relationship with mental illness and depression. Cortisol also plays a role with hair growth too and can explain why we lose our hair when we’re stressed.

So what did the researchers find out? Well, turns out that when they tested adolescents’ hair with their answers to questionnaires about their mental health, there wasn’t much that overlapped between cortisol levels and depressive symptoms.

While you can’t use your hair to find out or explain why your mood isn’t at its peak or why you’re so stressed, the study is one of the first that tests 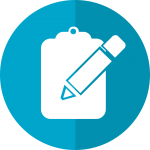 cortisol effects specifically in adolescents, and one of the first that tests cortisol in the hair for a mental illness. It helps to lay the groundwork for more objective testing. Currently, depression is primarily diagnosed using a scale where people respond to questions, but items like stigma and fear can affect how people respond. This is especially true in teenagers, who are more likely to want to feel “accepted” and part of the norm, so they may answer questions that they think will help others see them that way. By doing something like testing hair for depression, the diagnosis may be more absolute and can help lead to early interventions and treatment before symptoms can potentially worsen.

What do you think about the idea of testing hair for mental illness? What benefits can you see with physical tests like these if they can help predict depression?