Social media can be used as a great way to bring awareness to a variety of topics, much like the #icebucketchallenge. This hashtag brought about awareness, mass donations, and a large open forum to discuss the issue and the amount of people that are effected by ALS. This same type of social media movement was used to bring awareness to black men and mental health using the hashtag #YouGoodMan.

#YouGoodMan began after Kid Cudi opened up about his experience with anxiety, depression, and suicidal thoughts. Hypermasculinity in American society leaves little room to discuss issues like mental health in a space lacking judgment.  Black men often have a hard time opening up about their feelings and emotions because they do not want to be seen as “weak”. There is a stigma about mental health in the black community. This hashtag was a small step to normalizing the discussion of mental illness. Men of color all over the world were sharing, connecting, and bringing much needed attention to this topic.  According to BuzzFeed News #YouGoodMan was created by  Dayna Lynn Nuckolls and @TheCosby to “create a space for black men to connect on the topic of mental illnesses.” 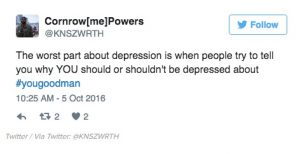 Mental Health is a touchy subject for many people, but having open honest conversations about mental health can break down many walls and give people permission to share their own story.  Creating an open, safe dialogue can go a long way in someone’s decision to get treatment.

Do you believe using social media to bring awareness to mental health needs is important?  What new hashtags would you like to see about mental health?