A Feminist View on Mental Illness

In a recent gender studies class, we read Fiona Rummery’s “Mad Women or Mad Society: Towards a Feminist Practice.” Part of this work explores the connection between a woman’s assumed role as the homemaker and her increased risk of mental health issues. I wanted to share a few points made by the author that I think are very interesting.

First, femininity has emphasis on serving others and ignoring a woman’s own needs. We all have heard the saying that a mom never gets a day off, but this undoes self-care and easily leads to burnout, anxiety, and depression. If a woman begins to experience such an issue, it is frowned upon for her to assume the sick role, a term that describes the acceptable behavior and expectations a person can receive when they are ill.

For example, if you are a student you are expected to show up for class and complete assignments.  However, if you end up in the hospital because you broke your arm while running, your professors most likely would not expect you to come to class and might allow you to submit assignments after the due date. Your injury excuses you from your normal responsibilities. You have taken on a new role: the sick role.

However, women who try to shift from their “normal role” into the sick role are often met with harsh criticism; they are expected to continue carrying out their usual roles (e.g., mother, wife). If a woman asks for days off from work, they are said to be overly dramatic, needy or milking their illnesses. Neglecting a woman’s health needs increases recovery time, if recovery even occurs at all. 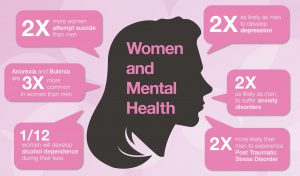 An interesting quote from Rummery is, “Concepts of femininity and madness are actually interchangeable.” In Western society, there are certain characteristics or traits that are thought to be “feminine,” such as constantly worrying about meeting children’s’ needs.  And are typically thought to be mentally unhealthy.

There used to be a group of mental disorders called Histrionic Personality Disorders (now under Personality Disorders), which were marked by female overreaction and increased feelings. However, psychologist Inge Broveman’s research in the 1970’s declared that a mentally healthy woman is more emotional and more excitable. This means that things which can be viewed as healthy female traits may also be seen as symptoms of mental illness. Women who successfully fulfill a “feminine role” can be easily diagnosed and labeled.

This also provides a lot of irony: women who are emotionally normal are labeled as psychotic, but those who have actual problems are thought to be seeking attention. In the first case, a woman is diagnosed with a condition she does not have, and in the second case, she cannot seek the help she truly needs. Because gender and psychology are so tangled, going against these emotional stereotypes can be viewed negatively (e.g., aggression).

Mental illness can be used as a form of social control over women. In addition to being unable to use the sick role, depressed women are much more unlikely to question gender roles or challenge broader social structures. This creates a cycle that silences women and ignores their health needs: First, a woman develops symptoms of a mental health condition. Second, she is judged for her illness. Third, she is not given proper medical and social support. Fourth, her symptoms may turn into an untreated mental illness.

Lastly, any individual, not just women, can feel limited in their ability to stand up against the labels and mistreatment surrounding mental illness symptoms and conditions. Stigma often makes it difficult to change the way society views a woman’s (and others) mental well-being and self-worth.

I find the psychology and sociology of gender and sexuality to be fascinating, and I hope I was able to give you a new perspective on a woman’s mental health challenges.

Unfortunately, following the “masculine norms” of Western society also are connected with negative mental health outcomes. Men are “supposed” to be in control of their emotions and feelings, self-reliant and powerful.

What are your thoughts on these ideas? Have you noticed any other patterns surrounding gender (not just female) and mental health?