If I don’t talk about it, maybe it will go away

I held off on telling anyone for a couple of months but my depression started looming and soon enough I had a pretty bad depressive episode. I hid from everyone I knew and I told my roommate I 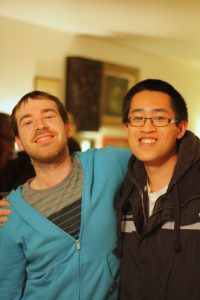 was sick. I was horrified! I was still depressed and I felt more alone than ever before because I had no one to talk to. Luckily one of my new friends – who is still my best friend – came to check on me and asked if I was ok. I couldn’t hold it in any longer, I felt so isolated and distraught, and I told her that I had a mental illness. I was worried about her reaction but my friend told me that her younger brother struggles with depression. She gave me a hug and offered to help. I’ll never forget what she told me, “We’ve all got something!” After that I started telling the important people in my life, including the disability services office that helps students with disabilities get accommodations in college, about my depression and most people understood. My friend was right, we all have mountains to climb and it is significantly easier to scale that mountain when we have friends to help keep us steady and strong.